When you need to count the characters in cells, use the LEN function—which counts letters, numbers, characters, and all spaces. For example, the length of “It’s 98 degrees today, so I’ll go swimming” (excluding the quotes) is 42 characters—31 letters, 2 numbers, 8 spaces, a comma, and 2 apostrophes.

To use the function, enter =LEN(cell) in the formula bar, then press Enter on your keyboard.

1. The LEN function in Excel counts the number of characters in a cell.

2. You can combine the SUM function and the LEN function to count the number of characters in a range of cells.

Note: as you can imagine, this formula can get quite long.

3. The array formula below counts the number of characters in a range of cells.

Note: finish an array formula by pressing CTRL + SHIFT + ENTER. Excel adds the curly braces {}. The array constant {9;4;6;5} is used as an argument for the SUM function, giving a result of 24. Maybe this is one step too far for you at this stage, but it shows you one of the many other powerful features Excel has to offer.

4. Use the LEN function and the SUBSTITUTE function to count how many times a specific character (in this example, the character a) occurs in a cell.

5. The array formula below counts how many times a specific character (in this example, the character a) occurs in a range of cells.

Note: finish an array formula by pressing CTRL + SHIFT + ENTER. Excel adds the curly braces {}. The array constant {1;1;2;1} is used as an argument for the SUM function, giving a result of 5. The SUBSTITUTE function is case-sensitive. The A in Alaska is not counted.

6. The array formula below counts both lower and upper case occurrences of a specific character (in this example, the character a).

Explanation: The LOWER function converts all letters to lowercase first.

Multiple cells: To apply the same formula to multiple cells, enter the formula in the first cell and then drag the fill handle down (or across) the range of cells. 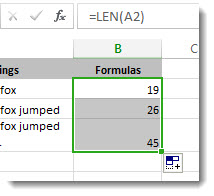 Give it a try

Here are some examples that demonstrate how to use the LEN function.

Copy the table below and paste it into cell A1 in an Excel worksheet. Drag the formula from B2 to B4 to see the length of the text in all the cells in column A.

Count characters in one cell

The formula counts the characters in cell A2, which totals to 27—which includes all spaces and the period at the end of the sentence.

NOTE: LEN counts any spaces after the last character.

Count a total number of characters

This counts the characters in each of the three cells and totals them (92).

Adjusting column widths and row heights in Excel can make for a much nicer looking spreadsheet. No need for cells that get cut off! And if you learn to quickly use AutoFit, you
31 January 2020
If you have a worksheet with data in columns that you need to rotate to rearrange it in rows, use the Transpose feature. With it, you can quickly switch data from columns to
31 January 2020
The Close and Open Method in Excel VBA can be used to close and open workbooks. Remember, the Workbooks collection contains all the Workbook objects that are currently open. Place a command button
22 October 2020